Alec Etheredge of the Shelby County Reporter said, “Oak Mountain is an extremely young team that isn’t scared to play everybody on the bench at any given moment, which has helped them propel to one of the state’s deepest teams.

Now sitting at 19-8 heading into the area tournament, the Eagles are poised to make a run not just because their young players have grown with experience throughout the season such as Evan Smith at point guard, as well as Noah Young, Zane Nelson and many others, but seniors like Drew Dunn, Antheny Carey and Turner Youngblood have all stepped their game up as well.

This team is as dangerous as any heading into their area tournament matchup with Thompson on Thursday, Feb. 7, looking to clinch a spot in the Sweet 16 for the first time since 2016.” 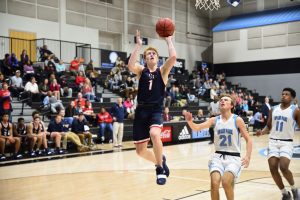